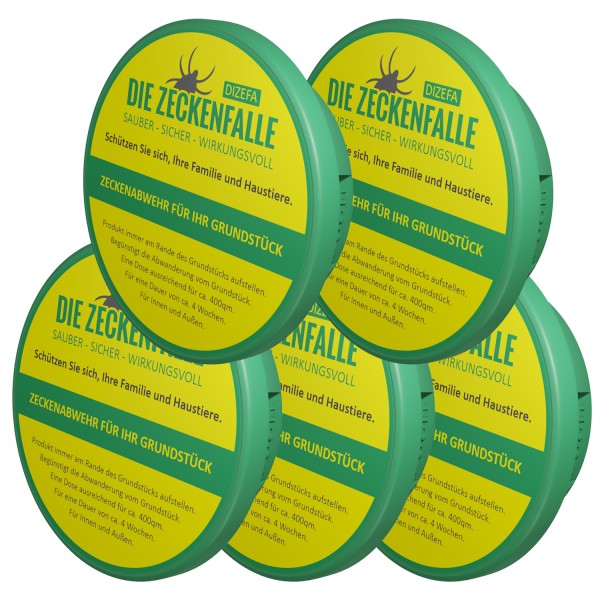 In your immediate area you can treat yourself and your pets to tick bites with the "tick trap" .
The biologic trap is non-toxic and environmentally friendly.
Just set the trap on the edge of your plot. The attractants attract the ticks and they stick in the trap.
The trap is enough for about 400qm. After about 4 weeks it should be replaced. The disposal takes place via the house mumll.

THE ZECK - A TINY SPINNING DOLL

Ticks are found throughout Europe. The common wood buck (Ixodes ricinus) belongs to the Schildzecken and is the most common in Germany occurring species.

The small arachnids mainly sit in warm, somewhat shady places in the undergrowth, on grasses, trees at the edge of the forest as well as in meadows and on fields at a height of up to 1.50 cm. Because the tick is a parasite, it needs other creatures to survive, from whose blood it nourishes itself. Their hosts include wild and domestic animals and humans. With her & quothallerschen organ & quot, the tick can perceive the fragrances of a possible victim (sweaty). It also responds to body heat and exhaled carbon dioxide.

In a flash, the tick drops and clings to the fur, fabric or skin.
With her jaw claws (chelicerae), she scratches the skin of the host, stinging with her stinging apparatus (hypostome) and sucks the blood. In doing so, it secretes harmful substances so that the person affected can U. only noticed that he was stabbed by a tick.
Because of the "tools" that the tick uses, zoologists speak of a "stitch", rather than a "bite" as commonly used.

Ticks are feared as the culprit of various diseases. The best known are the tick-borne meningoencephalitis (TBE) and Lyme borreliosis. However, not all ticks are infected with these viruses and bacteria. Careful control of clothing and skin is important after a stay in nature to remove ticks as quickly as possible. If a tick is infected, the pathogens of the TBE with the saliva immediately enter the bloodstream. In bacterial borreliosis, the infection takes place several hours later.

Important instructions:
The killer trap can prevent the risk of tick bites, but does not provide 100% security. That is why we advise you to search for pets and ticks after your stay outdoors.
Do not break the trap and do not eat the culver.
German brand product.