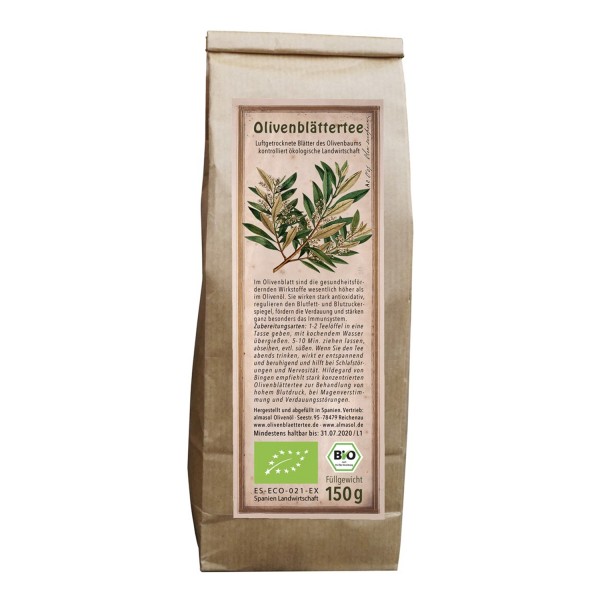 Description Reviews 0
Description
THE OLIVE TREE In the biblical story of the Ark, it is reported that a dove brought Noah... more
Close menu
Product information "Olive leaf tea BIO"
THE OLIVE TREE

In the biblical story of the Ark, it is reported that a dove brought Noah an olive branch as a sign that life has returned to earth. In this beautiful picture the great importance of the olive tree becomes visible.

For centuries the tree and its products have played an important role in many cultures. Its best known product is the olive oil, which has been and will be used both for the food and for the beauty care.

Olive trees (Olea europaea) have been around 4000 years BC. Chr. Used as a crop. The evergreen slow-growing plant can grow up to 20 meters high and several hundred years, depending on the species. The tree tolerates great heat, is tolerant, but sensitive to the cold. The first yield of the olive tree usually only after seven years.

Throughout the plant (root, bark, fruits and flowers) there are various active ingredients that protect against insects and germs and are thus very resistant, which is also expressed in their old age. An important ingredient is oleuropein.

Oleuropein belongs to the phytamines, which are plant substances that are as important to our health as the vitamins.

The bittern, which is found mainly in the leaves of the olive, but also in other parts of the plant, is said to have a number of health-promoting properties. Oleuropein is found in the leaves in 3000 times higher concentration than in the olive oil. One reason is that the vitally important leaves remain on the branches for about five years, which is why the tree has to be particularly good at chasing shoots and mushrooms all the time.

This substance has a strong antioxidant effect and can thus contribute greatly to the human body against the harmful effects of free radicals. Oleuropein is not only a good cell protection, it also has antipruritic and anti-inflammatory properties and can fight against viruses, fungi and bacteria successfully. Among the many benefits of oleuropein are antibacterial and antiviral effects, including against herpes and influenza viruses and against Candida albicans.

In the olive leaves but still contain other interesting substances. They include oleoside, olivanol, oleosterol and glycosides. Most of these potent olive tree ingredients are so-called phytochemicals. They serve plants primarily as repellents and dyes as well as growth regulators. Secondary plant compounds have an antioxidant and antimicrobial effect, regulate blood lipid and blood sugar levels, promote digestion and boost the immune system - to name but a few. The secret of the olive tree lies in the synergy of its ingredients. The interaction of these plants results in the comprehensive effectiveness of this plant - but for themselves they are not nearly as effective.

Our aromatic tea has a beautiful amber color. It is obtained from the small leaves of the olive tree variety Manzanilla Cacere & ntildea and comes from controlled organic farming.
The olive blossoms are elaborately hand-patted and gently dried. It is not fermented, almost all active ingredients of the green leaves are preserved.

Olive blossom tea may be served pure or mixed with other herbs, flavors or soles may be added.

a. Crush olive leaves or grate with the butter. Add 1 to 2 teaspoons to a cup, fold with boiling water and simmer. Leave to taste for 10 to 15 minutes, strain and possibly season with a little sugar or honey. Adults drink 3 cups, schoolchildren 2 cups and toddlers 1 cup throughout the day. If you drink this tea in the evening, it has a relaxing and soothing effect, good for sleeping and nervousness.

b. Add 10 to 20 grams of olive leaves directly into about 2 liters of boiling water. Reduce the heat immediately and let the tea soak for 15 minutes, stirring occasionally. Then strain through a sieve. Distributed over 3 days, chilled or whipped.

After opening keep closed in the refrigerator.


& Oumlko seal of approval of the Spanish province of Extremadura
German organic seal.