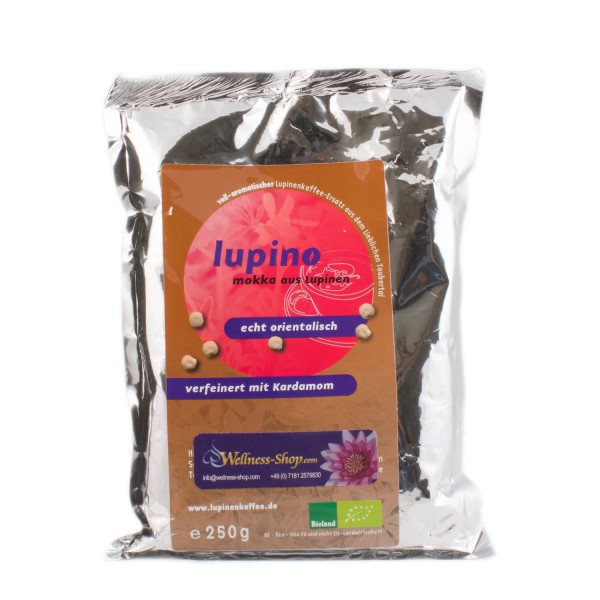 GENUINE LUPINE COFFEE FROM ORGANIC FARMING (Bioland) FROM A FAMILY CREW FROM BADEN WÜSTENBERG.
Since 1996, the lupine drink & quotLupino & quot; is produced. He was the first lupine coffee ever to appear on the German market (since 1918). The Soleilup lupins are grown according to Bioland guidelines. The beans are roasted and ground like coffee beans. Lupine coffee tastes like real coffee, but is free of caffeine and gluten.

The lupine coffee is very good. He contains

The southern lupins are grown in Baden-Wuerttemberg. In late summer, they are harvested, cleaned and dried if necessary. Then they are placed in small batches in a private home. In doing so, great value is placed on a gentle remainder (at low temperatures with a long recovery of about 20 minutes).

Our Lupino mocha is accompanied by ground cardamom seeds. As a result, he gets his special, tasty touch.

Prepare it like a classic mocha. The coffee powder is boiled with water and sugar (to taste) and served in small mocha cups. Enjoy this healthy and tasty drink!
You will be enthusiastic!

The lupine belongs to the legumes, and thus belongs to the same plant family as peas or beans. Unlike the protein-rich plant, lupine coffee does not contain any protein. The sweet lupine used for our coffee is grown in Germany.

Cardamom or cardamom (Elettaria cardamomum) comes from India, where it is still the main growing area. As a result, the two to four millimeter large seeds of the ginger root are used, which are in capsules of the side shoot. Cardamom tastes sweet and aromatic, but also burning like eucalyptus. It is considered heart and stomach. Because of its fine aroma, it is one of the noblest and therefore the most expensive sausages in the world.
GETTING TO WHY IT WORKS TO TRANSFER TO LUPINE COFFEE

Caffeine increases the level of adrenaline, which is exactly the effect that coffee drinkers perceive as a kick. High consumption of coffee can cause the adrenal glands to leak, which leads to the adrenal gland being unable to provide enough adrenaline in a stressful situation. Epinephrine insufficiency can cause a large number of other problems, including the swollen immune system, anxiety and panic attacks.

Coffee should be avoided altogether during homoeopathic treatment. Even a small sip of coffee, coffee ice cream, a coffee treat are enough to spoil the success of a treatment or destroy the success. There are more and more in the coffee, than the caffeine, which are to blame for this effect. Other caffeine-containing substances that are not healthy but have no effect on homoeopathic treatment prove this.