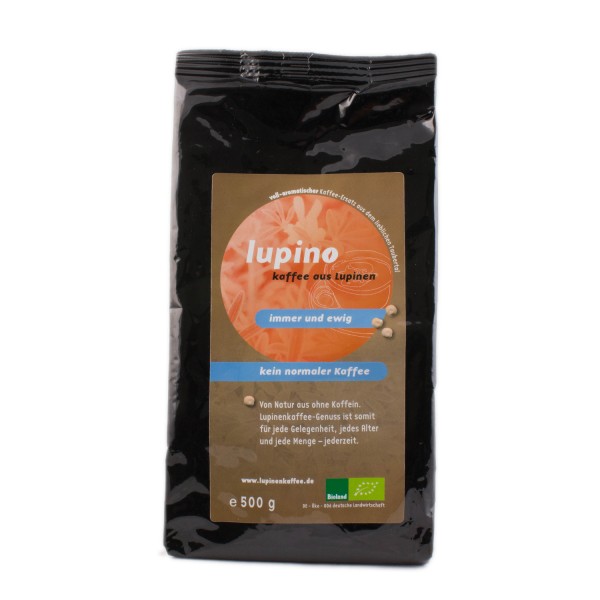 Since 1996, the lupine drink "Lupino" is produced. This made him the first lupine coffee ever to appear on the German market (since 1918).

The sweet lupins are grown according to Bioland guidelines. The beans are roasted and ground like coffee beans. Lupine coffee tastes very similar to real bean coffee, but is free of caffeine and gluten . The preparation is just like normal bean coffee!

The preparation is very simple. Prepare Lupino like bean coffee, in a coffee maker or freshly brewed.

Per cup (250ml) one counts a heaped teaspoon or a coffee lot.

1. Lupino as a filter coffee: Coffee is placed in a paper filter and brewed with boiling water gradually.

2. Lupino in the coffee machine: use as normal coffee powder, depending on the device, it may be that the coffee appears a bit thin.

3. Overcook Lupino or with a Frenchpress: Here, the lupine coffee powder is simply brewed with boiling water or squeezed in a flask (Frenchpress).

5. Lupino in the percolator (Schwedenkanne): This is the manufacturer's favorite. Here the coffee is brewed directly - you get a heavenly good lupine coffee.

The sweet lupins are grown in Baden-Württemberg. In late summer, they are harvested, cleaned and dried if necessary. They are then roasted in small batches in a private roasting shop. It is placed on a gentle roasting (at low temperatures with a long roast of about 20 minutes) great value.

Mix Lupino (or Lupresso) with cocoa powder and milk and then froth it with a milk frother. This awakening drink tastes delicious and can be prepared both cold and hot.

The lupine is one of the legumes, thus belongs to the same plant family as peas or beans. Unlike the protein-rich plant, lupine coffee does not contain any protein. It is grown in Germany. For our coffee, the white sweet lupine is used.

REASONS WHY IT WORKS TO TRANSFER TO LUPINE COFFEE

Caffeine increases the level of adrenaline, which is exactly the effect that coffee drinkers perceive as a kick. High consumption of coffee can cause the fatigue of the adrenal glands, which means that in a stressful situation, the adrenal glands are no longer able to release enough adrenaline. Adrenaline insufficiency can cause a large number of other problems, including weakened immune systems, anxiety and panic attacks.

Coffee should be avoided altogether during a homeopathic treatment. Even a small sip of coffee, coffee ice cream, a coffee receipt is enough to disturb the success of a treatment or to destroy the success. It is more the oils in coffee than caffeine, which are to blame for this effect. Other caffeine-containing substances, although they are not healthy, but have no effect on homeopathic treatment, prove this.