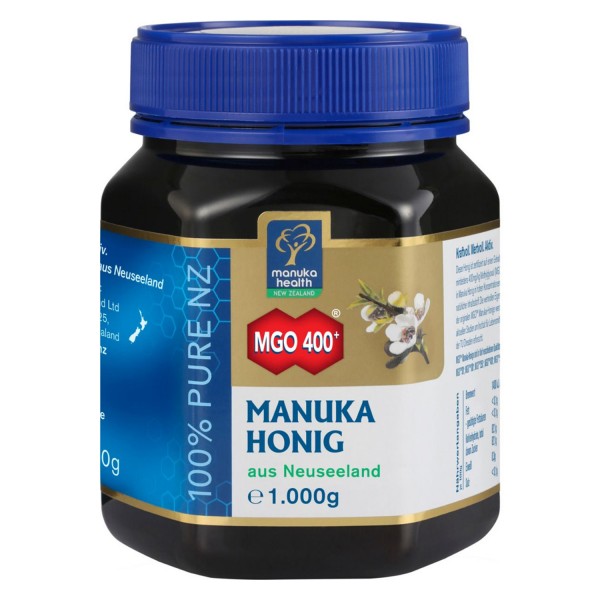 Instructions for use : Store below 25 degrees. Active Manuka honeys with a proven MGO content are also suitable for hot drinks, because the ingredient methylglyoxal (MGO) is largely insensitive to heat.

There are already numerous imitation products on the market for Manuka honey! Please make sure that the terms "UMF" and "MGO" are protected trademarks that may only be used when honey leaves New Zealand in its original container.

The Manuka (Leptospermum scoparium) belongs to the myrtle family and thrives in New Zealand from the coasts to the heights of alpine regions.

The resilient, evergreen plant, which is also known as "Red Manuka" or "New Zealand Tea Tree" (not to be confused with the Australian tea tree Melaleuca alternifolia), can take on a variety of shapes: a 5 centimeter shrub or a 15 meter high tree that stands alone or appears as a whole undergrowth.

The narrow, elongated, almost needle-like leaves have an aromatic smell and a bitter, but not unpleasant, tart taste. The flowers are particularly beautiful in December (New Zealand summer).

The plant became known through Captain James COOK, who arrived in New Zealand in 1769 and whose crew prepared the leaves as a tea drink.

The original use of the Manuka plants began much earlier, however: The Maori (native people of New Zealand), who also call the red Manuka Kahikatoa, treated burns, infections, insect bites and even wounds of their warriors with envelopes made from them.

In addition, the plant has found and is used (as juice, infusion, inhalation, etc.) for digestive disorders, diarrhea, colic, fever, cold, urinary tract diseases, sore throat, back pain and as a sedative. Recent studies by Prof. Dr. Henle at the chair of the Technical University in Dresden have shown that this special, active ingredient is methylglyoxal. Methylglyoxal is produced naturally in the nectar of the Manuka flower and is collected by the bees. Studies at the University of Waikoto (Prof. Dr. Molan) have also shown that Manuka can counteract the attack by Helicobacter pylori bacteria, which cause gastric ulcers.

The name of the active Manuka honey is gradually being changed to the more precise measurement method MGO. MGO refers to the amount of methylglyoxal in mg that are contained in one kilo of Manuka honey.

No temperature is added to the honey during spinning. It is spun at its natural temperature.

Note:  Opened goods cannot be exchanged! Not suitable for children under 12 months.